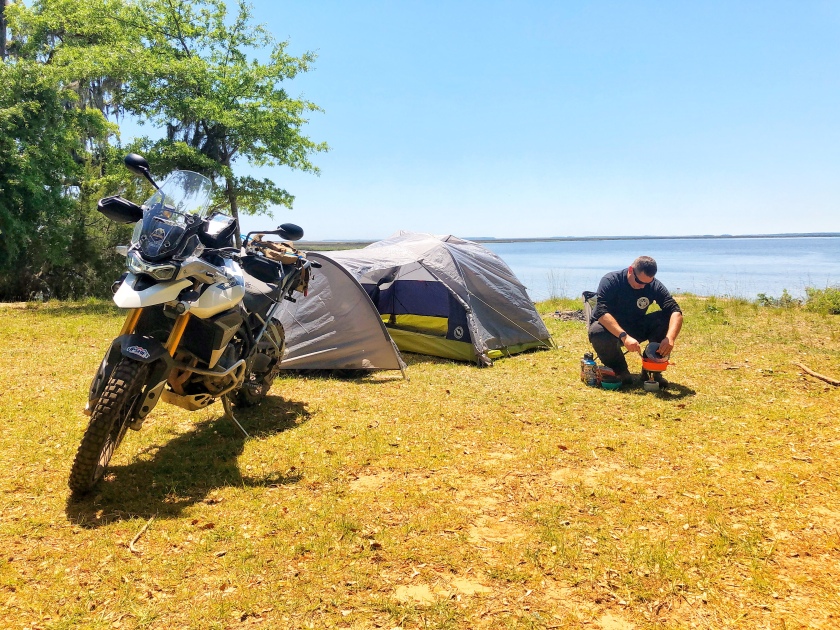 A couple of weeks ago I was given the opportunity from longtime supporter Motocampnerd to try out a new tent from the outdoors product manufacturer Big Agnes.  Recently, Big Agnes rereleased the Blacktail Hotel 2 and 3 for 2021 with several new upgrades over the previous models.  Big Agnes took a unique step forward with the Blacktail models by offering their new Bike Pack option, a design with 12-inch shock corded poles and a unique compression sack that makes the tent perfect for storage in panniers, saddle bags, and even on mountain bike handle bars.  Coming in at a packed weight of a little over 6 pounds the Blacktail 2 is perfect for back country travel as well as adventures close to home.

When I first unboxed the Blacktail 2 I was surprised at how compact it was and for sure, Big Agnes definitely did their research.  The Blacktail 2’s compression sack is made of the same polyester material that the rain fly is made out of and it has a number of synch straps and an independent pole bag.  Everything straps together nicely into one complete package and fits perfectly into a Wolfman Luggage Large Rolle bag as well as a Mosko Moto Scout Pannier bag.

The tent itself is pretty much the same as the previous Blacktail models and has a pair of dual zipper doors.  For a two person tent the Blacktail Two has a floor area of 33 square feet and inside there’s plenty of headroom due to pre bent poles and additional storage options in the form of a large ceiling pocket.  If more storage area is needed, you can purchase a gear loft separately.  The floor and the fly of the Blacktail models are made of polyester with a waterproof polyurethane coating to keep you and your gear nice and dry.  Big Agnes has made the Blacktail models to be used with a smaller rain fly that eliminates the vestibule capability however this hasn’t been released yet.

What really sets the Blacktail series apart from its competitors is the large vestibule.  The vestibule provides a floor area of 28 square feet which is perfect for storing panniers and soft bags along with riding gear.  Another great use for the vestibule is a porch for cooking or relaxing in a folding camp chair such as the Big Agnes Skyline or an REI Flexlite during inclement weather.

So far, I’ve only been able to spend a single night in the Blacktail 2 and compared to tents that I’ve used in the past I was quite impressed.  It did take me a little longer than I liked to set it up since I was unfamiliar with it but once I figured out how the vestibule goes on it was fairly easy.  Setting it up for the first time took me around twenty minutes and I’m confident with repeated use this spring and summer I’ll get it down to ten to fifteen minutes.  Inside the tent I had plenty of space and the ceiling pocket was great to store my phone and other small items for the night.  The vestibule provided me with plenty of storage area for my riding gear and my Wolfman soft luggage.  I did notice that the vestibule has two air vents that pop open on the top for additional ventilation but they are angled in a way where water can’t get in if it does rain.  The next morning when it came time to pack up, the Blacktail 2 folded up quite nicely and fit perfectly back into its stuff sack.

With an MSRP of $300 dollars Big Agnes certainly nailed it with the Blacktail 2.  In terms of a lightweight tent that could be adapted for moto camping the Blacktail 2 fits the bill and when you include all of the space in the vestibule its perfect to use as a small base camp tent or a tent to use on multiday trips.  Big Agnes’s reputation for building a high-quality product is second to none and with the Bike Pack option it’s easy to see that the company is pushing for some of its products to be used more for two wheeled recreation.