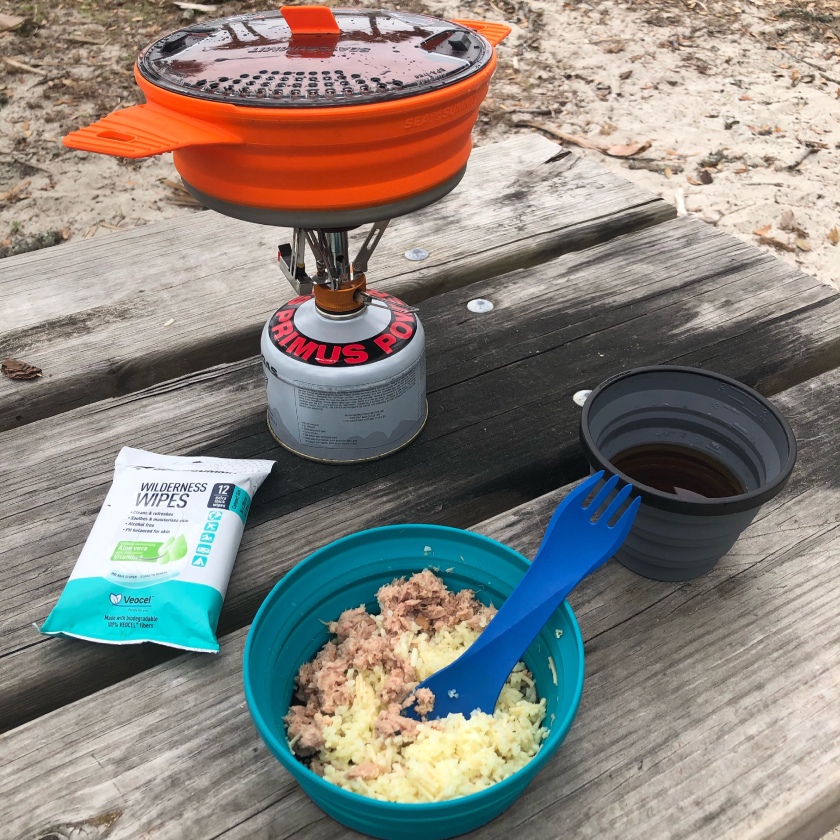 When packing for a moto camping trip, space and size considerations are paramount especially if someone is going for a minimalist approach.  Generally speaking, most camping cook sets are fairly bulky and can be a little heavy…one thing I’ve always remembered from conducting long range reconnaissance patrols was the phrase “ounces equal pounds and pounds equal pain”.  Even though they can be heavy and bulky let’s face it cook sets are not only needed but also need to be versatile. This is where Sea to Summit comes into play.  Sea to Summit is an Australian outdoors company that got its start making waterproof dry bags for white rafting and mountaineering.  Over time, the company has branched out into other outdoors genres such as camping and hiking and now offers products such as tents, sleeping pads, and camping cook sets.  With a background in the outdoors, Sea to Summit redefined the way camping cook sets are made by making them drastically lighter and collapsible which is perfect for mountaineering and moto camping.

Recently I purchased a Sea to Summit Solo Cook Set after a moto camping trip that I went on in February.  On that trip my existing cook set did its job but after having it for ten years it started to show its age plus it’s kind of heavy and bulky to fit into my Wolfman soft luggage.  I purchased my Sea to Summit Solo Camp Set from Motocampnerd for around $70 dollars.  At first, I was little turned away by the price but once you see the quality of materials and how small this set is it’s well worth it.

The Solo Cook Set comes with a 1.4-liter pot, lid with built in strainer, bowl, and cup which all collapse and fit into the pot for a small compact design.  One great feature about them being collapsible is that they are compatible with other Sea to Summit products such as the X Kettle. The Solo Cook Set’s pot is made of food grade heat resistant silicone walls with an aluminum base that allows for faster boil time and is easier stirring without any spillage.  Something to take into account though is that the Solo Cook Set is not meant for open flames or fires and should only be used on a backpacking or camping stove.

On my trip to the Sea Islands, I used the Solo Cook Set with my camp stove set up and it worked great.  I was able to boil water very rapidly and I had no issues cooking rice and then straining it with the lid.  Once I was done, clean up was a breeze for both the pot and bowl and everything collapsed back down for easy storage.  The Sea to Summit Solo Cook Set is a great addition to a riders moto camping gear and can easily pack away into a pannier or soft bag. I highly recommend the Solo Cook Set for any rider whose into moto camping no matter if its an overnight trip or a cross country adventure. If your looking to purchase your own Sea to Summit Solo Camp set I highly recommend checking out Motocampnerd and use the coupon code StrykerADV for ten percent off your order.

Before and after….sometimes KTM’s can have a little trouble in slick mud and decide to slide into a ditch.
Adventures on dirt in the Low Country before we slammed by a torrential downpour and a KTM decided to go explore a ditch😂.
This weeks backwoods history lesson in the South Carolina Low Country. The Combahee River raid was an interesting operation that many history books don’t cover and really should.
Anyone else ready for the weekend?
I saw this on a group on FB and it’s pretty accurate…
Trying to figure out how much landscaping I need to do to afford a new Bonnie…that bike was a ton of fun to ride.