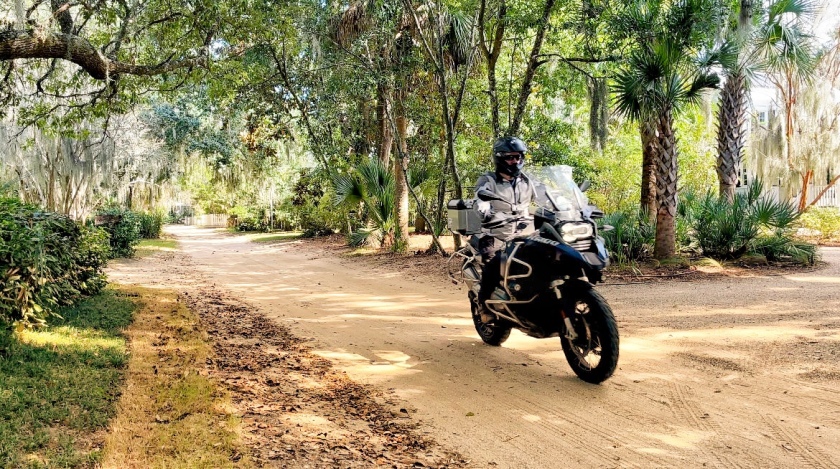 To the west of Charleston lies an island that in some regards time has forgotten. This small island community was first explored by the British in 1666 and has been considered by many as Charleston’s “Back Porch”. Compared to the neighboring areas of John’s Island and James Island, Wadmalaw Island is mostly undeveloped with a handful of small villages and businesses. With access limited to a single bridge and two main roads, Wadmalaw Island and it’s 2,500 year round residents are fairly isolated compared to other island communities around Charleston.

Recently, I took an afternoon to ride the quiet back roads around Wadmalaw Island on a 2017 BMW R1200 GS. Timewise, Wadmalaw Island is about 30 to 40 minutes away from Charleston and once you cross the small bridge to get onto the island you start riding through a dense canopy of Southern Live Oaks. The main road on the island is the Maybank Highway and it winds it’s way through the central part of the island until it ends in the small village of Rockville on the islands southern shore. Off of Maybank Highway are most of the small villages as well as America’s only tea garden, the Charleston Tea Plantation. What began as an experiment in the 1960’s by Lipton has turned into the home of the only mass produced tea that is grown in America.

Following Maybank Highway down to its terminus is the small coastal village of Rockville. It is believed that Rockville was the site of the first landing and colonization efforts by the British on Wadmalaw Island. Rockville is home to a small historic district that has many Low Country styled homes dating back to the 1700’s and a small grocery store named Hum’s Grocery. Hum’s offers fresh local produce and some great homemade BBQ sandwiches which I highly recommend.

After a quick bite to eat I decided it was time to get off the pavement and start exploring the miles of sand roads on Wadmalaw Island. The BMW was at home on the hard packed sand and I enjoyed putting it through it’s paces as I rode through the islands wooded areas. Eventually, I worked my over to Bears Bluff Road which is the other main road on the island. Heading west on Bears Bluff Road takes you past Deepwater Vineyard which is a small local winery that’s quickly producing several popular red and white wines. After passing the winery I decided it was time to head back home to Charleston and rode a few more sand roads before I jumped back onto Maybank Highway.

Wrapping up, Wadmalaw Island is a great place for an afternoon ride to get away from the hustle and bustle of Charleston. I think on the entire ride I saw maybe five cars driving on the island which kind of gives you an idea on how quiet it is. The sand roads were great to ride on and an adventure bike would certainly be at home on them. As for the sights and sounds the island’s isolation is what gives it it’s appeal however, the Charleston Tea Plantation and Deepwater Vineyards are two places worth visiting. If your ever in the Low Country or Charleston it might be worth taking a ride out to Wadmalaw Island for a couple hours.