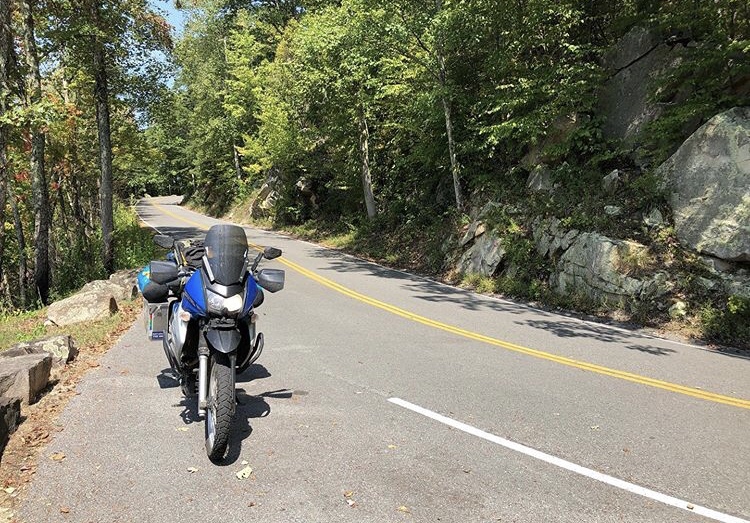 Well here we are on the last day of my cross country trip which looking back seems pretty daunting to ride a 650 thumper from Minnesota to South Carolina. While my original plans for the trip changed dramatically, overall it wasn’t bad and even though I spent more time on pavement then expected it was still a lot of fun. However, the final day was more challenging then I thought.

The entry for this day is going to be the shortest of the series since well it was probably the most boring and I rode on the interstate for 90 percent of it. I left the sleepy mountain town of Hot Springs, North Carolina fairly early in the morning and continued riding south on Highway 25-70 into Asheville, North Carolina. This part of the ride was very enjoyable as it had some nice scenery and it was a typical two lane road that cut along side rivers and through mountain valleys. Coming into Ashville was where I hit the interstate for the first time on the entire trip and it was disheartening to get away from the quiet side roads and state highways.

Riding on the interstate seemed like it took forever mostly since I was focusing more on the traffic and it wasn’t to scenic. It was starting to get fairly hot and riding a mostly black motorcycle while wearing black riding gear was not helping the case either. At my final fuel stop in Orangeburg, South Carolina I grabbed some lunch and slammed two gatorades and pretty much a gallon of water. Dehydration and heat exhaustion were starting to take a toll. With 70 miles to go this was going to be a haul.

Traffic had started to pick up quite a bit as I got closer to Charleston and in the northern outskirts of the city I-26 went from a four lane to a six lane highway. The KLR managed to hold a speed of 75 miles an hour fairly well considering she was overloaded and a little sluggish from the days hard riding. In the end, I rode 246 miles in 6 hours and when I got off my bike I could barely move due to heat exhaustion and being dehydrated. That night I grabbed a long cold shower and drank what seemed like a couple gallons of water. Looking back on the entire trip that last day was the worst by far but the KLR and I managed to get through it.

After 6 days and 1700 miles the KLR and I managed to travel from the upper Mid West to the Atlantic Ocean. Overall the trip wasn’t to bad, the KLR showed why it’s such a reliable bike and we didn’t get hit with bad weather. However, this trip was the KLR’s last long distance one, with me at least. Reflecting on the trip I figured out what features I wanted in my next bike and it also helped me reevaluate the type of gear that I would wear…riding in South Carolina is totally different then Minnesota.